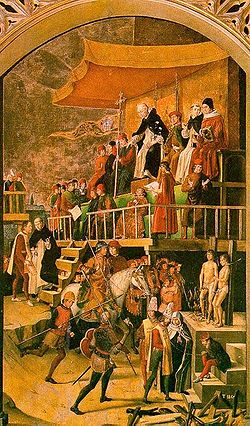 Representation of an Auto de fé, as depicted by Pedro Berruguete (around 1495[1]).

Auto de fé in medieval Spanish (and in Portuguese) means "act of faith".

An auto de fé was the ritual of public penance of condemned heretics and apostates that took place when the Spanish Inquisition or the Portuguese Inquisition had decided their punishment (that is, after the trial). The phrase is used most frequently in English in its alternative Portuguese form auto-da-fé.